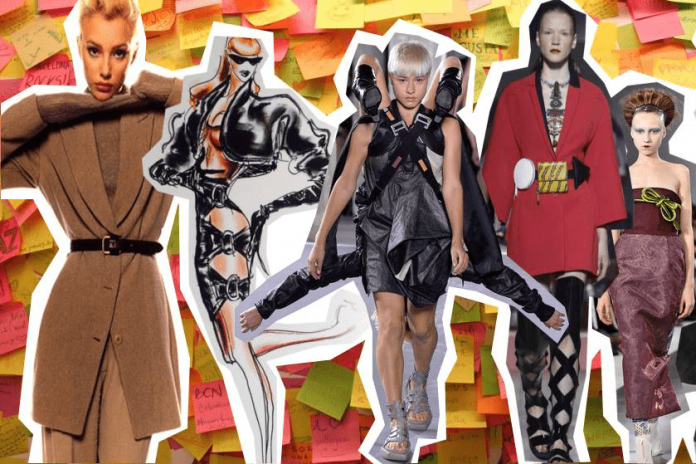 Leather or rope, chain or rubber, plastic or hide, suede or python, and paint or metal, the belt proposed to the Paris Fashion Week this year is fasten: to the bag (Maison Martin Margiela), to the neck and shoes (Louis Vuitton), to the dress (Anthony Vaccarello, Comme des Garconnes) and over the body of model (Rick Owens).

A real human belt seems be the fashion show of Rick Owens where models shows their selves connected by harnesses and belts.

Antony Vaccarello instead uses the metal: a piercing giant that holds the top and bottom of the dress.

“Hold fast!” is the motto of the Fashion Week this year: how not to feel it, inside the Grand Palais – the airport Cambon N. 5 – where seat belts are among the hair of the models, on suitcases, and on video showed during the fashion-show. 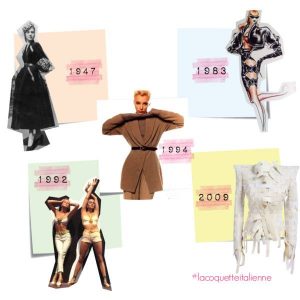 The belt, thin or thick, rigid or flexible, decorated as jewel, or simple, it is still a must-have fashion.It is the oldest decorative apparel (together with the fibula) and an essential accessory for its versatility.The belt was created to support the weight of the dress.

In classical antiquity, the belt takes on a highly symbolic role in clothing: in Crete only dancers and courtesans could wear it (above the famous tunic); in the Middle Ages it indicates women of rank, and the poorest is forbidden to wear it.

Over the years the belt becomes more and more important in women’s clothing: you hang jewelry and mirrors on belt.

After the First World War, the belt becomes an indispensable accessory in all shapes of women’s fashion: in 1947, with the New Look proposed by Christian Dior, belt discovers new waistline – the famous “Wasp Waist” – higher and more tight than proposed in the previous years. With major brands such as Hermès – which has the classic two-tone model with the buckle in the shape of H – from the seventies is the belt (with bag and shoes together) the accessory that determines the style and the value of a dress: Givenchy proposes on catwalk his bustier model; while Louis Vuitton, Gucci, Fendi and Burberry have the basic model, characterized by the logo that distinguishes the brand. 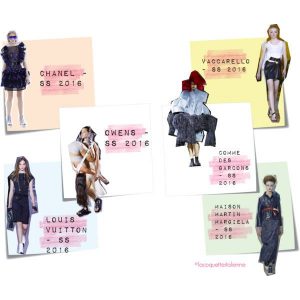 A new use, or rather re-using of the belt, is made by Maison Martin Margiela, at the beginning of the new century: corsets and jackets constructed and re-sewn entirely by straps and belts used.“Buckle up!” says us this year Maison Martin Margiela.
La Maison offers “ropes like belts” and “belts like ropes” fastened to the body of the models and handbags on their shoulders, knotting the latter, so that they become backpacks.

The belts of Vaccarello, Louis Vuitton and Comme des Garconnes are sewn to dress at Fashion Week: Vaccarello’s belt is transformist,it seems a navel piercing, that unites and divides the dress.

Louis Vuitton’s belt seems to defy force of gravity with black leather belt, tied by the waist to the neck.
Straps appear then on shoes and necks of models.Comme des Garconnes covers with fur the waist of model, already cluttered and cumbersome for a non-dress. The fur belt seems fasten to the front of non-dress.

If the belt should “support the dress” by definition, Comme des Garcons – viceversa – proposes a belt supported by dress.

Belt and dress become one thing only: cdg demostrate as a belt is an important and an integral part of the dress.

As I Am: Giveaway

Since the Logomania has again become the most beloved fashion trend after years of decline, many people become addicted. In particular I am crazy for...
Fashion

A blue-glam outfit to start the day! You have already understood this concept: I love dresses, long or short, equally. If I had the opportunity,...